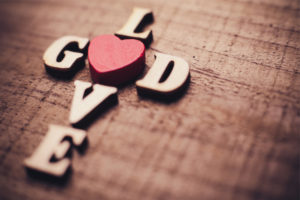 This article is by Kirsten and published by Christian Faith Living

God’s Love is the love of a Father, Creator, and Friend. The Bible is full of examples of how He has shown His love to people throughout history.

He showed love to Adam, first by warning him of the danger of temptation, and then, when Adam had to leave the garden because of his sin, by both clothing him and by promising to fix the evil that Adam had caused.

He showed His love to His people in Israel by saving them from the oppression of the Egyptians and continually calling them back to Himself when they disobeyed (again and again and again).

But the most wonderful and important demonstration of His love was that He came and made himself human through His son, Jesus Christ, so that He could die in our place.

We (humanity, and each of us personally) do evil and that sin requires the justice of death. God loved people so much, that he was willing to die instead (John 3:16).

He became human and even though He never did any evil, he died a horrible death. He had to die if we were to live because God’s Justice demanded punishment against our sin.

Think of your best friend. What if they were about to be killed, but you could offer your life instead? Would you do it?

Jesus did exactly that. He loved us so much that he went through shame, torture, ridicule, and finally death, just because He loved us and wanted us to be with him eternally.

We deserved to die like that, but God’s Love couldn’t allow sin to have the final word. He did it even though we had offended him already (Romans 5:8). There isn’t any love stronger than that!

God loves us because He created us to love him and he made us in His likeness. In fact, the Bible goes so far as to tell us that God IS love. That means that we are to share God’s love with people around us.

God’s Love is not so much a feeling, as an action. God expresses His love through action: Though his death, through his gift of eternal life, through his patient waiting for people to return to him, and through his natural gifts to everyone. If we don’t love others, by choosing to love them in what we do, then we are not loving God. (1 John 4:8)

Jesus tells us how to love others. He says to feed the poor, pray for our enemies, clothe those who need it, visit people behind bars, and offer shelter to those without. He says to offer assistance, not only to people we associate easily with but also to those who are very different from us. When we do what He says, we are sharing God’s love and we are loving Jesus back.