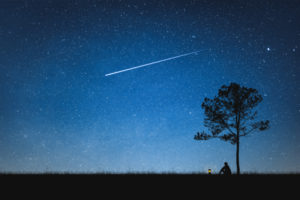 What are you hoping for today–perhaps for a better marriage, a job promotion, or a better year than last year? Is it a genuine hope or a just a wish? Whenever I hear someone say, “Well, I hope it happens,” I wonder if they realize the power of hope. Hope is far more than a wish. The apostle Paul says that hope comes from heaven, that it is eternal (1 Corinthians 13:13).

The story of Abraham and Sarah is the classic story of hope and faith. When God spoke the promise to Abraham that they would have a son, it birthed hope in his heart. But they were far past the age of conceiving a child, and the promise seemed an impossibility. So what did God do? “He brought Abraham outside and said, ‘Look now toward heaven, and count the stars if you are able to number them.’ And He said to him, ‘So shall your descendants be'” (Genesis 15:5). God gave Abraham a beautiful visual as an anchor for his hope. How many times did Abraham count the stars to hold on to this hope in the many years that followed? And the Scripture says that Abraham “did not doubt or waver in unbelief concerning the promise of God, but he grew strong and empowered by faith” (Romans 4:20). He could “hope on” against the impossible because he kept his eyes fixed on Almighty God, and that hope fueled his faith to the point where Sarah had the strength to conceive Isaac.

The Scripture says that “faith is the substance of things hoped for” (Hebrews 11:3). If you have a promise from God’s Word that you are believing for, put hope in front of that promise. Hope gives your faith something to anchor itself to you in disappointing times, in challenging times. God created this hope inside you, and He doesn’t want you to be vague about it. Hope creates vision. For Abraham it was the stars. You need a picture of what you’re going after to keep that promise alive in your heart, to create a vision so you can make it through the difficult times.

In Paul’s prayer in Romans 15, he says, “Now may the God of hope fill you with all joy and peace in believing, that you may abound in hope by the power of the Holy Spirit.” Paul was saying, “Take your eyes off your own limitations and focus on the God of all hope, because He’s the One who’s going to bring it to pass in His timing and in His way.” God is faithful. But it’s up to you and me to develop this hope that fuels our faith. Keep your hopes up because hope is from heaven!